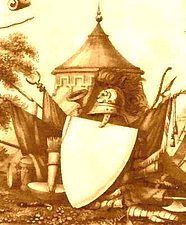 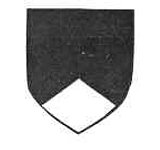 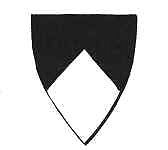 a.)  A practical manual of heraldry and of heraldic illuminations

There are quite a variety of different shield shapes in heraldry which over centuries has constantly have changed in shape. Below are some of the most common shields and shield divisions

The principal element and most important part of a heraldic achievement is the shield,

There has been many distinctive shapes developed during the different periods

of heraldry. Also the heraldic artist by itself was able to include his own presentation

of a shield. The complete surface of the shield is described as field, it can be plain,

by various lines of partition. The shield contains the field where on are represented

the charges and figures that form a Coat of Arms. Following examples

are only a small collection of the numerous possibilities of heraldry

The shield is the element on which armorial charges are displayed, it may be of any form.
The only exception is the lozenge or diamond shape which is reserved for maiden ladies and widows.